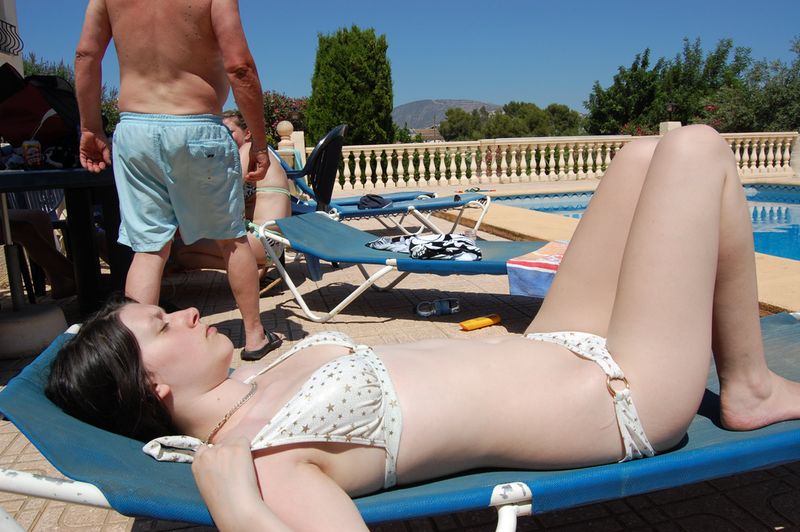 This is a picture of me before I lost weight. I didn’t even know it existed before last week. My boyfriend was flicking through old holiday snaps and we went right back to 2009. It’s safe to say I was in shock when I saw it.

You see, back then (and still a bit now) I hated myself. Not just the same way many people look in the mirror and feel a bit gross. I was depressed, for a number of reasons, but my image was a serious cause for concern. At this stage, I was gravely unhappy with my body and when I imagine what life was like back then, I picture myself huge. When I first saw this photo I didn’t even recognise myself. I wasn’t overweight at all, but I felt it.

It’s weird how now, even though I’m years beyond my poisoned thoughts, I still think back to then and imagine myself as overweight.

When does it become a problem?

Personally I’ve never seen myself as too skinny, even after this photo. Seeing my sister fight off anorexia made me determined to never go down that route. However, in this moment I was still miserable. I was educated enough to dodge the tactics she used, but due to bullying and other mental health issues I was still struggling with the way I saw myself. I always believed that if I wasn’t so big and ugly, people would like me and I wouldn’t be such a target.

After this image was taken, I left high school to attend college and not much changed. Not many people caught on at the time as I was walking 3 miles a day to classes and very stressed, so simply put my change in appearance down to that.

I developed body dysmorphic disorder(BDD), which effects a huge amount of people. We often expect those with body image issues to be of either side of the spectrum, either severely over-weight or dangerously thin. Clearly that isn’t the case. As you can see in the image above, I was just normal weight but I just couldn’t see it.

What can you do?

The sad fact is that many of these people are too ashamed of their own self to speak out and we do develop ways of hiding our issues.

Do you feel this way?
It’s a personal journey, so whilst I could tell you my full story I still may not have the answers for you. Speaking out definitely helps and finding healthy role models, rather than the ‘thinspiration’ you may have been using.

Find yourself a ‘safe food’. That one thing you can eat, even on the bad days, even when you feel guilty. A nutritious food that gives you the energy you need and puts you back on the right track.

Keep a diary too. Talking about it to friends and family out loud can be daunting, but a mixture of personal evaluation and a support network gives you the opportunity to look back on your progress, to see how far you’ve come.

Consider holistic methods before medication. I went through counselling to work through my issues and it took around 2 years of peaks and troughs before being able to go it alone. My sister, who I briefly mentioned, was put on medication at a young age and became dependant, so without fear mongering, just consider all options. I won’t be telling her full story as it’s not my place.

Does someone you know show signs of this?
Accept their feelings. It’s the hardest thing to do and it’s going to be frustrating, but you’re not going to change their mind. It’s something they have to change and learn from themselves. You’ll just have to be there to support them on their way.

You can help them, guide them and ask them to speak to a professional, but make sure you’re tactful with your approach. MIND have some great advice for those in your position, so how about you both read though the material together? It will help you both understand and perhaps even prompt your friend to think logically about the irrational thoughts that plague their mind.

It’s about being healthy and having fun

I started the gym back in October 2014 in a bid to get healthy. My flatmate was convinced that I’d love metafit and quite frankly, I have no idea what gave her that impression! It’s horrific.

Having said that, since going to the gym with her I’ve noticed I’ll eat more and choose better meals for dinner at least. My migraines have lessened and I have more energy throughout the day.

My mindset has change completely, I want to be fit and not simply thin. I look towards healthy bloggers such as
HannahGetsHench and SkinnedCarTree for inspiration as I know these ladies are all about being healthy and happy, rather than the pursuit of ‘skinny’.

I also took part in the incredible DW 40 Days of Fitness challenge, which really helped me to focus on my health rather than body image. The plan gave me time to rest, but also pushed me to try new exercises and work towards personal bests.

The best thing about it all was the #fitnessrevolution twitter chat that gave me the opportunity to talk to other bloggers. As I mentioned before, it’s vital to chat to others when you’re pursuing any fitness or weight loss plans, as it keeps your mind on the right track and keeps you away from negative thoughts. The community spirit really bolstered my efforts and I should really say a huge thank you to all of the wonderful people I’ve met recently through the chats!

I still have moments

I can take down a maccies breakfast or a takeaway, but if the guilt kicks in I’ll skip meals. Yes, I know this does more harm but no matter how many statistics I read, old habits die hard. It was once almost a natural routine. I’d eat unhealthy things in front of people to throw them off the scent, but then I’d be miserable and not eat when I was on my own.

Coming up to the summer season is a particularly hard time as many of us focus on crash dieting in time for upcoming holidays. You might not think that the things you say have a big impact on those around you, but a flippant remark can stay with someone forever. On my birthday night out, a fella told be I was making a ‘bad life choice’ for eating cheesy chips. He didn’t know me, or my story, but felt the need to come over to me and judge. He probably thought it was funny, I didn’t. This idea of being ‘ready’ for summer is pretty darn toxic. Fair play if you want to get fit and healthy in time for summer night runs, playing footie on the greens or tennis season; but the idea of needing to be skinny because you’ll be wearing less clothes is simply idiotic.

I know this is the way some of you would like to look and that’s fine, as long as you’re healthy of course. But using the term summer ready makes it seem as if being slim in summer is a necessity and certainly makes those of us that aren’t so slim feel a little crap.

All it takes is a little change like this to help society become more body positive. It’s all about changing perceptions and that’s the responsibility of us all… I mean, if I could turn back time, I’d adopt the mindset of a pug. Look at this lil guy. Do his chubby rolls ever get in the way of him having some fun in the sun? No. I rest my case.